During January INTRA took part in the annual Medway Photo Festival  as one of several neighbouring venues to host photography students from UCA Rochester.

The ‘4:38’ exhibition at INTRA featured work by fashion photography students presented on two themes, transforming our windows and workspace to showcase their ongoing studies.

On one side of the space we had a fashion after party theme ‘The Gig’ with a stack of monitors in the window running a film, video projections, decorations, musical instruments, glitter curtains and lots of sparkles and luxe decor details.

The other side of the space featured ‘Tellus Mater’, an installation with fashion shots juxtaposing the beauty and destruction of nature – particularly the sea and earth. Photographs were pinned on the wall, a projected super 8 film showed a model in a landscape with a power station, a neon goddess symbol glowed in one window and a draped window installation of found natural objects and photographs filled another.

The other venues to explore in the Chatham Intra area were Chatham House, the Northern Seaman micro pub, Memories Are Made Of This tea rooms and AllGen Gaming.
Venues in Chatham and Rochester also took part. 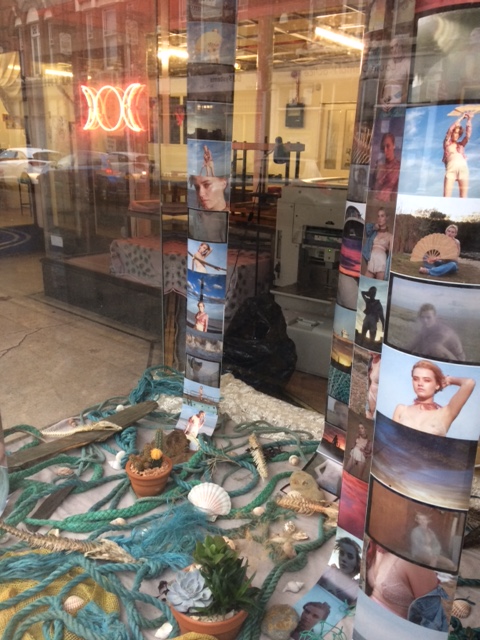 This site uses Akismet to reduce spam. Learn how your comment data is processed.

See all public events and workshops